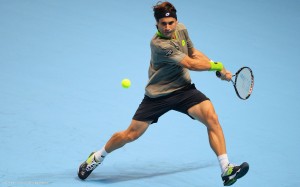 Playing tennis will typically improve a person’s physical condition considerably. Tennis players are models of strength, agility and fitness. However, while it is largely beneficial to your health to take up a sport like tennis, it is not all good news on the health front for tennis players. Tennis is also a sport known for its overuse injuries and fatigue conditions. The most common health concerns among tennis players are ankle, knee and wrist injuries, chronic back pain and heat stroke. These are all things that can be avoided by a person who practices safety in their tennis playing and is intuitive with their body. However, at least one of these injuries strike nearly half of all tennis players.

Ankle, knee and wrist injuries are common in tennis because it is a high impact sport on these particular joints. Tennis requires very rapid movement around a court which means that the legs are always engaged in a high speed dance. The direction a person moves depends on their opponent’s move, which means a tennis player is constantly making a series of sudden, rapid movements around a court. This puts a strain on the ankle, knee and wrist joints over time, and it increases the likelihood of a stress injury because of how sudden and jerky the movements can be. The wrist absorbs most of the impact of the tennis racket making contact with the ball, so overuse and fracture injuries are not uncommon.

Chronic back pain is another typical discomfort among tennis players. The back is heavily engaged in tennis as all the strength behind a player’s swing originates in their back and arm muscles. The back is easily strained and is a part of the body that requires a great deal of physical care. When it sustains injury, it takes considerably longer to heal than other parts of the body. Back injury can also be permanent and become something that a person has to manage for life. It is critical for tennis players to properly care for their backs while engaging in their sport.

Lastly, heat stroke affects numerous tennis players because of the high level of activity they engage in during a game. Tennis heats a person’s inner core tremendously because of how much it charges the cardiovascular system. Tennis players need to monitor their core temperatures as they play and constantly consume liquids to ensure they do not suffer heat stroke.